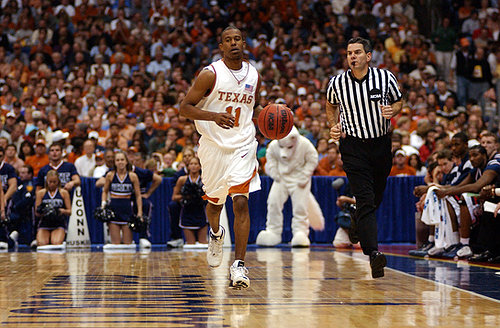 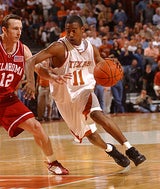 Houston, Texas, native T.J. Ford is one of the most decorated athletes in the University of Texas's basketball history. Before Ford even stepped on campus, his basketball career was full of countless accomplishments as a point guard at Texas 5A high school Sugar Land Willowridge. From 1999 to 2001, his high school team compiled a 75-1 record (including a 62-game winning streak) earning a pair of Texas Class 5A state titles resulting in a McDonald's High School All-American selection for Ford. The moment Ford put on the burnt orange jersey for the Texas Longhorns, he immediately was a star player for the Longhorns. He was recognized as the USBWA Freshman of the Year in addition to being first-team All-Big 12 and Big 12 Freshman of the Year in 2002. Ford's sophomore season at Texas was one for the history books as he led Texas to the Final Four averaging 15 points, 7.7 assists and 3.9 rebounds per game. The incredible season resulted in Naismith Player of Year, Wooden Player of Year, Sporting News Player of the Year, consensus first-team All-American, first-team All-Big 12 and Big 12 Player of the Year honors for Ford. He went on to average 11.2 points, 5.8 assists and 3.1 rebounds over his 9-year NBA career (Milwaukee 2003-06, Toronto 2006-08, Indiana 2008-11 and San Antonio 2011-12). Despite injuries shortening his NBA career, Ford is undoubtedly one of greatest players to come out of the state of Texas. He was inducted into the Texas Sports Hall of Fame in 2016.