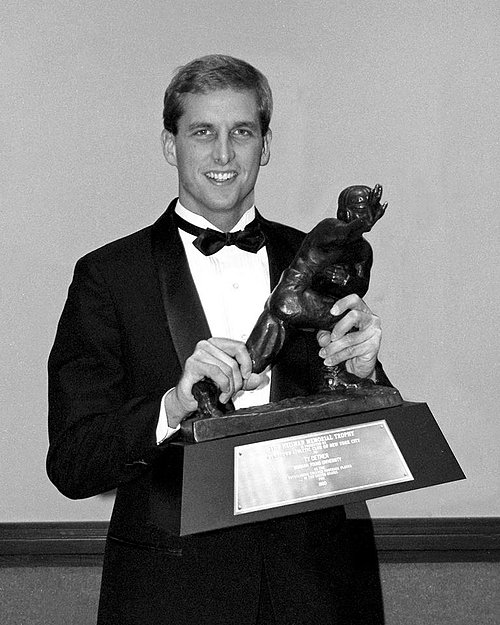 Heisman Trophy winning quarterback Ty Detmer began his career playing high school football for his father, coach Sonny Detmer at San Antonio's Southwest High School. Detmer earned all-state honors while leading the nation in passing as a senior in 1986 with 3,357 yards. He threw for 8,005 yards and 71 touchdowns during his prep career. In college Detmer found the perfect fit for his talents at BYU (1987-1991) in coach LaVell Edwards' quarterback friendly offense. Detmer was a two-time all-American at BYU passing for 15,031 yards and 121 touchdowns during his career. In 1990 Detmer, as a junior, put together one of the finest seasons in college football history throwing for an NCAA-record 5,188 yards and 41 touchdowns. He won every major award that season including the Heisman, Maxwell and Davey O'Brien trophies. The Cougars were invited to four bowl games and compiled a record of 37-13-2 during the Detmer years, including a 28-21 victory over top-ranked Miami on September 8, 1990 in Provo, one of the biggest wins in BYU history. Detmer broke 59 NCAA records and tied three others. In 14 seasons in the NFL he threw for 6,351 yards and 34 TDs while playing for Green Bay, Philadelphia, San Francisco, Cleveland, Detroit & Atlanta. Detmer was inducted into the Texas High School Football Hall of Fame in 1997 and the College Football Hall of Fame in 2015.