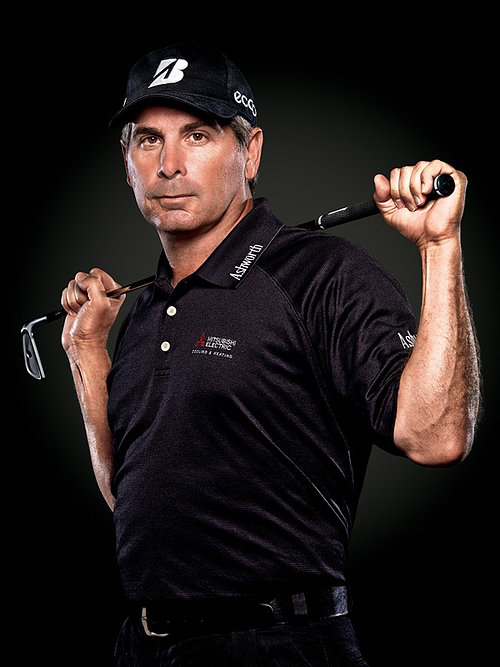 Fred Couples - A native of Seattle, Washington, professional golfer Fred Couples rose to stardom at the University of Houston. By 1992 he had elevated himself to the No. 1 ranked professional player in the world. Couples has won 15 PGA Tours, 3 European tours, and 13 Champions Tour events. Couples graduated from O'Dea High School in Seattle and played for the Houston Cougars’ golf team from 1977-1980, earning All-American honors his last two years. Turning professional in 1980, he had his first PGA Tour victory in 1983 at the Kemper Open. Playing alongside pro golfers Scott Simpson and T.C. Chen, the three finished their match over an hour later than the prior group. In the end, Couples scored a birdie to win his first PGA title. Taking home the Byron Nelson in 1987, his golf career was right on track. In 1991 and 1992 Couples was named PGA Tour Player of the Year, gaining five PGA victories in two years and winning the Masters in 1992. He stayed atop the No. 1 World Ranking for 16 weeks, winning the Nissan Los Angeles Open and the Nestle Invitational. "When you're prepared, you're more confident," said Couples. "When you have a strategy, you're more comfortable." From 1991-95, Couples achieved five separate national victories across the world: the Johnnie Walker World Championship in '91 and '95, World Cup, Dubai Desert Classic, and the Johnnie Walker Classic. He enjoys visiting the UK, traveling for the first time in 1984. He tied for 3rd place twice at St. Andrews in 1991 and 2005. From 1992-95 he paired with Davis Love III to win a record-breaking four consecutive World Cup of Golf titles. In November 1995 he recorded back-to-back victories on the PGA European Tour, being the first to do so since Charles Coody in 1973. This was also a milestone moment for Couples - - the first time in his career to have consecutive wins. In 2003 he also placed first in the Shell Houston Open, marking his first win in five years. Couples competed in The Masters again in April 2006, hoping to earn his second green jacket, but fell short against Phil Mickelson. Although he came in second place, he felt completely confident in his ability to compete. "I expect myself to do well. I'm not, like, 'Oh, well. I'm not in that category just yet,'" said Couples. "I know I can still do it." Couples is still one of the best players on Tour. He was chosen as Presidents Cup captain in 2009, leading the United States to victory. In 2010, Couples made his first appearance in the Champions Tours' opening event, the Mitsubishi Electric Championship. He placed second, barely falling short behind Tom Watson, but won his next three events, the ACE Group Classic, Toshiba Classic and the Cap Cana Championship. He became the first player in Champions Tour history to win three of his first four career events. Couples has 25 additional professional victories. He was chosen as Presidents Cup captain again in 2011 and 2013, adding to his 5 other Presidents Cup appearances. He has made 5 Ryder Cup appearances, winning in 1989, 1991, and 1993. Couples has made an everlasting mark in the world of golf and continues to be respected among all players of the game. In 1991 and 1992 he was the PGA Tour Player of the Year as well as the PGA Tour Harry Vardon Trophy winner. In 2019 he won the Ambassador of Golf award. Inducted into the National Italian-American Sports Hall of Fame in 2007, he is now a member of the Texas Sports Hall of Fame (Class of 2011).