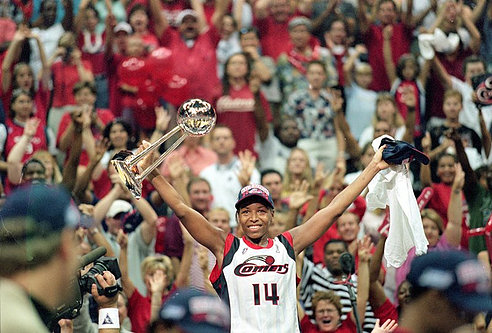 Cynthia Cooper-Dyke - Before joining the Houston Comets in 1997, Cynthia Cooper-Dyke had a stellar career for the USC Trojans. While playing guard from 1982 to 1986, she scored 1,559 career points and helped the Lady Trojans win back-to-back NCAA titles in 1982 and 1983. She continued her career in Europe with Segovia in Spain and Parma & Alcamo in Italy from 1986 to 1997. During that time, she won her league's scoring title in eight of ten seasons. As the catalyst for the Houston Comets from 1997-2000, Cooper-Dyke led her team to the WNBA's first four championship titles (1997-2000). She was also named MVP of the WNBA Finals four consecutive years. Her other numerous honors include being named All-WNBA four times, being voted to three All-Star games and earning the league's MVP award in 1997 and 1998. Cooper-Dyke led the WNBA in scoring three times and became the first player in league history to score 2,000 points. She averaged 21 points, 4.9 assists and 3.3 rebounds per game during her career. A member of the WNBA's 2006 All-Decade Team, she was also a member of the medal-winning USA Women's Olympic Basketball teams in 1988 and 1992. After a brief coaching stint with Phoenix Mercury, she returned to the Comets in 2003 at age 40, becoming the oldest woman, at the time, to ever play in a WNBA game. In 2011, she was selected as one of the top 15 players in WNBA history. Beginning in May 2005, Cooper-Dyke spent five seasons as the head coach at Prairie View A&M and then two seasons as the head coach at UNC Wilmington. In April 2012, she was named the head coach at Texas Southern. Cooper-Dyke served as TSU's head coach during the 2012-13 season before taking the reins at her alma mater, Southern California. She led the Lady Tigers to a 20-12 record and a trip to the postseason Women's NIT in her only season at TSU. She had a 70-57 record in four seasons at USC before stepping down in 2017. Cooper-Dyke provided color commentary for Texas Southern basketball home broadcasts on AT&T Sports Net Houston during the 2017-18 season before returning as TSU head coach for the 2019-20 season. Cooper, a 2009 inductee into the Women's Basketball Hall of Fame and a 2010 member of the Naismith Memorial Basketball Hall of Fame, also founded the Mary Cobb Building Dreams Foundation in honor of her late mother. She was inducted into the Texas Sports Hall of Fame in 2006.