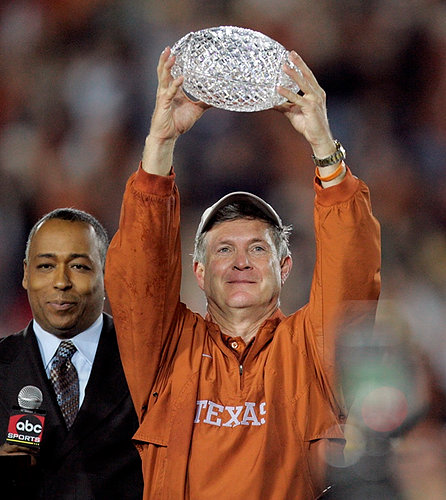 Head Coach William Mack Brown enters his 14th season with the University of Texas football team. Elevating the Longhorn program to unimaginable heights with a 133-34 record, the pinnacle of his career so far, is leading the Longhorns to a National Championship in 2005. Brown is one of the few coaches to lead two separate programs to a NCAA Top Five national finish. In 2005, Brown received the Paul W. "Bear" Bryant National Coach of the Year award, in 2008 he won the Bobby Dodd National Coach of the Year and the 2009 was named Big 12 Coach of the Year. Honored in the Longhorn Hall of Fame, Brown is the second coach in UT history to reach 100 wins, joining Darrell Royal. He is also one of six current coaches at NCAA Football Bowl Subdivision schools who have 100 victories or more at their university. He reached 200 victories as a head coach in 2008, making him the 19th coach to do so in ten years at a Football Bowl Subdivision school. Brown is also known as a great recruiter. "I've never seen anyone make friends better or quicker with the high school coaching community," said Eddie Joseph, former executive VP of the Texas High School Coaches Association. "He has the ability to make everyone feel at ease around him. I think the thing that makes him so great is that he has a passion for high school coaches and great respect for them." In his years at Texas, Brown's teams have included Heisman Trophy Winner Ricky Williams, two Heisman trophy runners-up, three Maxwell Award winners, two Manning Award winners, two Draddy/Campbell award winners (scholar-athlete award), 51 All-Americans, five Big 12 Offensive Players of the Year, five Big 12 Defensive Players of the Year and 10 Big 12 Freshman of the Year honorees. Born in Cookeville, Tenn., Brown played football at Putnam County High School, lettering three times. He earned his college diploma at Florida State, where he lettered twice as a running back for the Seminoles (1972-73) and graduated in 1974 with a bachelor's degree in education. Upon graduation, Brown coached for three seasons at Southern Mississippi, mainly working with the receivers. To continue his education, he earned his master's in administration from Southern Miss and graduated in 1976. After 10 seasons as an assistant, he accepted a head coaching position at Appalachian State in 1983. He left after one season to become offensive coordinator at Oklahoma. Spending a successful season at OU, he went on to become head coach at Tulane. His next stop was the University of North Carolina where he spent 12 years. Brown took a football program that had suffered losing seasons and rebuilt it to a 10-1 regular season record. Leaving UNC at its peak, he finally accepted the head coach position at UT in 1997. Having his most successful season of his career in 2005, Brown led the Longhorns to their first National Championship appearance since 1970. "Mack has helped bring back the pride in Texas Football," former Longhorns All-American Tommy Nobis said." Tradition is what makes the college game so exciting, and Mack is doing a great job getting everyone excited about wearing the burnt orange and white and being a Longhorn again." He was inducted into the Texas Sports Hall of Fame in 2011.