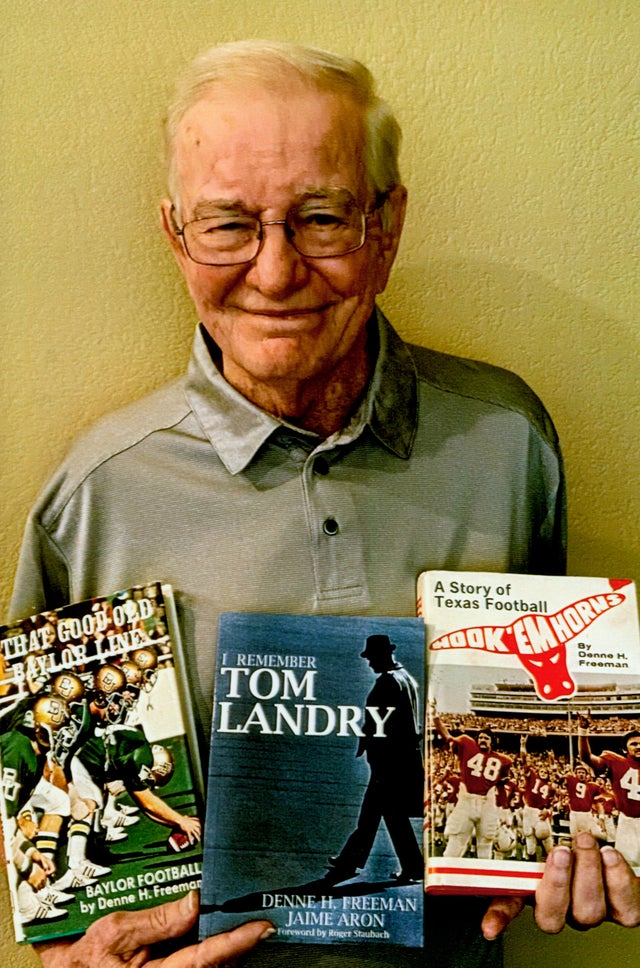 Denne Freeman was the Associated Press Texas Sports Editor for 31 years. He covered the Dallas Cowboys, including all their Super Bowls; the Texas Rangers and Nolan Ryan’s heroics; and the Dallas Stars; the Dallas NBA teams; major golf events including The Masters in 1997 when Tiger won; and top college football that included the 1969 Shootout game between Texas and Arkansas. As a news reporter for UPI, Denne covered the assassination of John F Kennedy, and later, for Associated Press covered Apollo 13. During his years at the AP, he covered 1000 MLB games, 500 NBA games, and 350 NFL games. His first collegiate football event for AP was the 1967 Texas A&M-Alabama Cotton Bowl. His career highlights included: coverage of the 1976 Montreal and 1984 Los Angeles Olympics and the 1975 Pan American Games in Mexico City; informing Roger Staubach that he had been selected to the Pro Football Hall of Fame; recording the first exclusive interview with Tom Landry after his firing; and reporting Nolan Ryan’s 7th No-Hitter, 5000th Strike Out,

In 1971, Denne won the AP National Award for his exclusive interview with Ben Hogan. He won the 1979 AP story of the year and was chosen Texas Sportswriter of the Year in 1980 by his peers of the National Sportscasters and Sportswriters Association for his coverage of the Bob Hayes trial. Denne was inducted into the Texas Sports Hall of Fame in 2020.