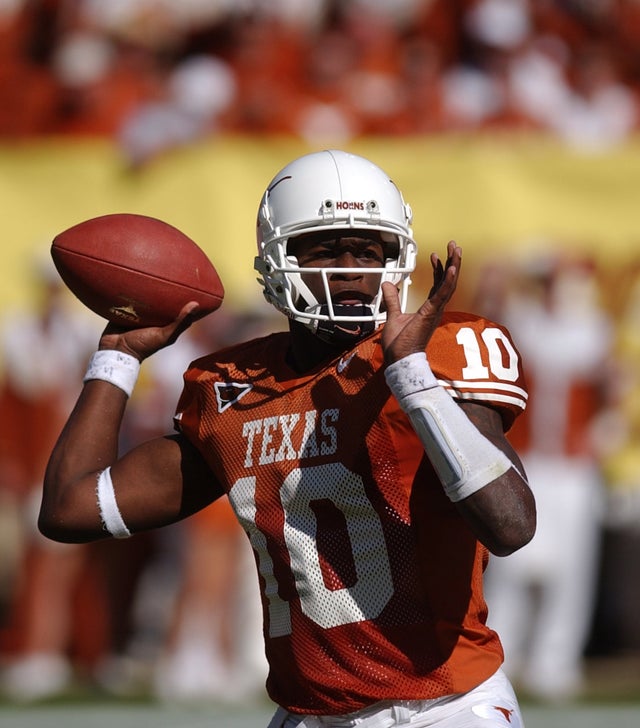 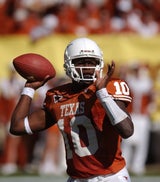 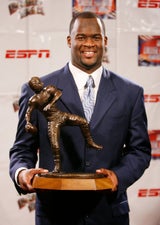 Houston native Vince Young was a pioneer of one of Longhorn football’s gilded eras. He was recruited by University of Texas from Houston Madison High School after being named the nation’s top high school prospect and Texas 5A Offensive Player of the Year in 2001. He graduated high school with a total 12,987 yards of total offense, and 59 touchdowns in his senior year.

At Texas, Young partnered well with Head Coach Mack Brown to bring the team to the top of their conference and beyond starting with Young being Big 12 Conference Offensive Freshman of the Year. During his sophomore season, Young started every game to led the team to an 11-1 season and their first Rose Bowl appearance with a victory against University of Michigan. With the reputation as a dual-threat quarterback, he not only passed for 1,849 yards but rushed for 1,189 yards. To begin his junior season, Young was on the cover of Dave Campbell's Texas Football Magazine along with Texas A&M quarterback Reggie McNeal. In 2005, UT won the Big 12 Conference Championship and Young was the runner-up for the Heisman. He led his team to an 11-0 regular season ranking #2 in BCS making it to the National Championship Rose Bowl game against the USC Trojans. With the Trojans as favored, Young’s 3 rushing touchdowns and 467 yards of total offense (267 passing and 200 rushing), the Longhorns won with a score of 41–38. He won Rose Bowl MVP and completed his third season with 3,036 yards passing and 1,050 yards. He was also awarded the Davey O'Brien Award and Longhorns MVP.

The following year in 2006, the Longhorns made it to their second BCS National Championship. That year, Young won the ESPY Award for Best Championship Performance. He set the UT quarterback record of 30-2, a .938 winning percentage and he passed for 6,040 yards. Texas honored Young by retiring his jersey in 2008.

Young was drafted to the Tennessee Titans in 2006 as the No. 3 overall draft pick. His rookie season, he broke the NFL rookie rushing record (552), and was named both NFL Offensive Rookie of the Year and Associated Press NFL Rookie of the Year. Young played in the 2006 and 2010 Pro Bowl. He played for the Titans five seasons, leaving to play for the Philadelphia Eagles, the Buffalo Bills, the Cleveland Browns, and the Green Bay Packers before retiring from the NFL in 2014. He was inducted into the Texas Sports Hall of Fame in 2018.