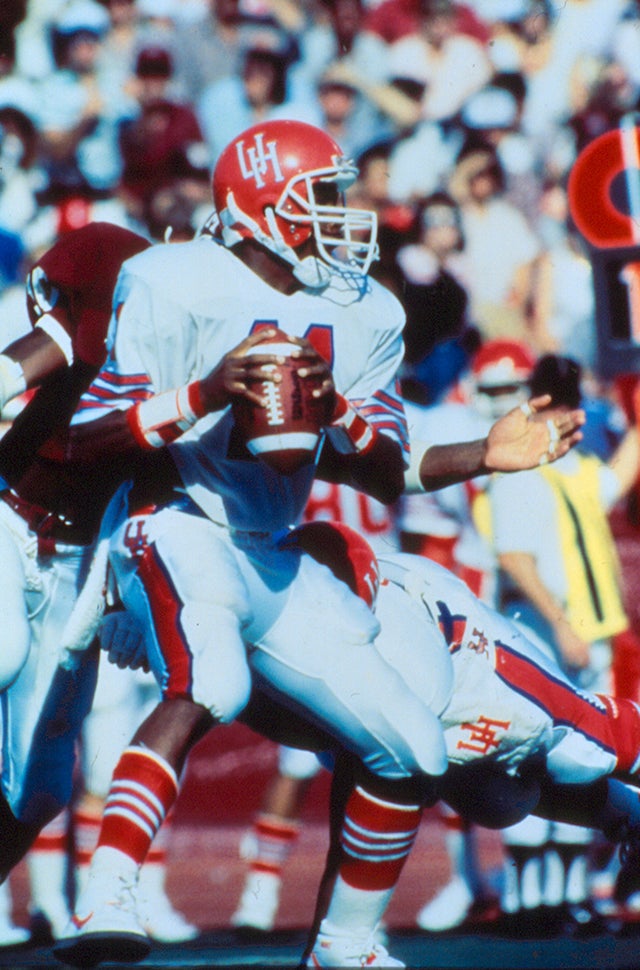 ﻿Andre Ware - - Heisman Trophy winner. It's the most prestigious award given in college football. Raised outside of Houston in the coastal lowlands of Texas, Ware played quarterback for the Dickinson High School. "I knew from the age of 11 that football would be the ticket for me to earn a college degree," Ware told the New York Times in an interview years ago. College recruiters were impressed with his athleticism and speed. While getting offers from several Texas schools to play something other than quarterback, Ware's mother encouraged him to stick with the recruiting process until he found exactly what he was looking for. In 1987, he joined the football team at the University of Houston. He blossomed during the "88 season, passing for 25 touchdowns to set a Southwest Conference record and throwing only eight interceptions. Houston ran the high-pressure "run and shoot" offense, which consisted of receiver motion emphasis and receiver adjustments to routes in response to different defenses. Ware threw for 24 touchdowns in his first four games of the 1989 season, Writers and broadcasters began took notice and began to pay attention. Against Baylor, noted for its strong pass defense, Ware threw for 514 yards. The Houston athletic department began to send out weekly "Air Ware" pamphlets to the press. Ware didn't slow down that season. Against Texas Tech he completed 37 passes for 475 yards. Against an over matched SMU, he threw for 517 yards in only 12 minutes of what became a 95-21 victory for Houston. Ware finished his college career with 4,699 yards, 44 touchdowns, and set 26 NCAA records. The U of H also set the record for average points per game with 53.5. Ware was the first African American quarterback to win the Heisman Trophy (1989) He also was named winner of the Davey O'Brien Award, given to the most outstanding quarterback of the year. Leading the Cougars to a No. 14 ranking in the nation his junior year, Ware entered the NFL draft and gave up his senior year. He was a first-round pick by the Detroit Lions, where he teamed up with the previous Heisman Trophy winner from 1988, running back Barry Sanders. He spent four seasons with the Lions, starting six games and playing 14. Ware began the 1994 season with the Los Angeles Raiders and tried to catch on with the Jacksonville Jaguars in 1995. Ware joined the Canadian Football League in 1995 and played for various teams including: the Ottawa Rough Riders, BC Lions and Toronto Argonauts. He also played for Berlin Thunder in 1999, a German NFL Europe team. After his playing career ended, Ware went into broadcasting. He has teamed up with Dave Pasch and Gary Thorne, for college football games on ESPN, ESPN 2 and ESPN on ABC. In July of 2009 he partnered with Dave Neal, long-time SEC broadcaster, for ESPN Regional Television's coverage of Southeastern Conference Football. Today Ware is part of the radio broadcast team for the Houston Texans. Ware was inducted into the College Football Hall of Fame in 2004. His exploits on the field in Houston are one of college football's spectacular success stories, and Ware has remained a well-loved figure in the Houston area. He is a member of the TSHOF Class of 2011.