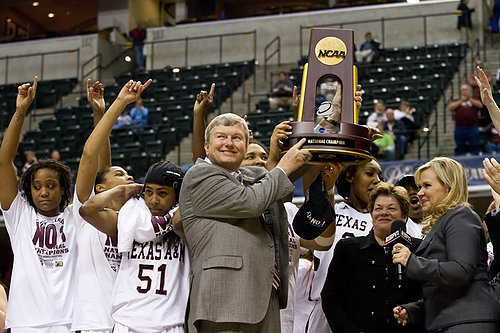 Gary Blair - The Class of 2011 would not be complete without Texas A&M women's basketball Head Coach Gary Blair. In his 35 years as a collegiate head coach, Blair has only experienced one losing season. A two-time national finalist for the esteemed Naismith Coach of the Year Award, he continues to represent the Aggies as one of the most active Division 1 coaches in the women's game today. With 30 postseason appearances, 25 NCAA Tournament appearances, and 2 Final Four appearances, Blair is far from a rookie. Highlighting his career is the fact that he is one of only three NCAA Division 1 coaches to lead two separate women's basketball teams to the NCAA Final Four - - Arkansas in 1998 and Texas A&M in 2011.

Born and raised in Dallas, Blair played center field on the baseball team at Bryan Adams High School, receiving all-city honors in 1963. He graduated from Texas Tech University with a bachelor's in health and physical education and a master's in education. After graduation, Blair thought he would end up coaching high school baseball somewhere in Lubbock, but plans changed when he was offered a position in Dallas at South Oak Cliff High School as the physical education coach. Blair became coach of the girl's basketball program, and the boys and girls golf teams at South Oak Cliff in 1973. Seven seasons and three state Class 4A championships later, Blair had made his mark in high school girl's basketball and was inducted into the Texas High School Basketball Hall of Fame.

In October 1980, he accepted the assistant coaching position at Louisiana Tech University under then co-head coaches Sonja Hogg and Leon Barmore. Blair spent 5 seasons at LA Tech, reaching the NCAA Final Four four times and winning two National Championships. Blair took the head coaching job at Stephen F. Austin University in 1985. The team enjoyed success under Blair and increased home attendance to rank in the top 12 of NCAA Division 1 attendance leaders. After eight years with SFA, Blair became head coach of the women's team at the University of Arkansas, accumulating a 198-120 record. Blair came to Texas A&M in 2003. He was a tireless recruiter and brought quality players to the campus in College Station. He continued to amaze Aggie fans with impressive record-breaking statistics. He worked hard to encourage fans to attend women's basketball games and increased attendance his first season by 71% from the previous year. The Aggies had their greatest year in 2011. They defeated Baylor 58-46 in front of 11,088 fans to advance to the Final Four. They then beat Stanford for a chance to play in the title game. The Aggies beat Notre Dame, 76-70, winning the National Championship for the first time in school history. In the 2012-13 season, the Aggies’ first in the Southeastern Conference, they went 25-10 becoming SEC champions. In his 19 years at Texas A&M, Blair has guided the women’s basketball program to 15 straight NCAA Tournament appearances, eight NCAA Sweet 16 appearances and three NCAA Elite 8 appearances. The most historic moment he's experienced took place in the 2010-11 season when the Aggies won the National Championship. Leading the Aggies to their first national title and first-ever trip to the NCAA Women's Final Four, Blair closed out the 2010-11 season with an astounding 33-5 record, the most wins in Aggie history. After this 2021-22 season, Blair is officially retiring after his 50th year of coaching. A legend in not only women's basketball but college sports will finish his final season as a head coach for the Aggies.