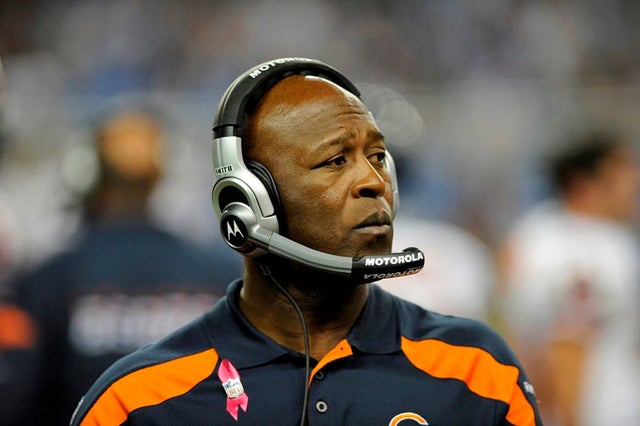 Head Coach Lovie Lee Smith enters his 8th season as Head Coach of the Chicago Bears. Voted NFL's Coach of the Year in 2005, Smith led his team to a division title in only his second season with Chicago. He's travelled the road to the Super Bowl twice in his career, once as the defensive coordinator for the St. Louis Rams in 2001 and in 2006 as head coach for the Chicago Bears. Born in Gladewater, Smith played football at Big Sandy High School, earning All-State honors three consecutive years as defensive end/linebacker. From 1973-75 the Big Sandy football team won three straight state championships. In 1974, he played in a 0-0 tie against fellow Class of 2011 inductee G.A. Moore's Celina team. The 1975 season marked a milestone year for Big Sandy, dominating with one of the most impressive seasons in Texas high school football history. The offense scored 824 points, setting a national record at the time. The defense allowed only 15 points scored for the entire season. An amazing number. Smith earned his college diploma at the University of Tulsa where he was a two-time All-American linebacker and safety. Upon graduation, he began his coaching career, which started back home in Big Sandy as defensive coordinator in 1980. He stayed home one year and then left to coach at Cascia Hall Preparatory School in Tulsa. He soon jumped to the collegiate level, coaching for various teams, including: University of Tulsa (1983-86), University of Wisconsin-Madison (1987), Arizona State University (1988-91), and the University of Kentucky (1992), the University of Tennessee (1993-94) and Ohio State University (1995). In 1996, Smith began his NFL career, starting with Tampa Bay as a linebackers coach. After five seasons with the Buccaneers, and assisting head coach Tony Dungy in developing the "Tampa Defense", Smith became defensive coordinator for the St. Louis Rams. Smith improved the Rams defense from giving up 29.4 points per game to 17.1 points in just one season. Smith became head coach for Chicago on January 15, 2004. Upon beginning his duties as head coach, Smith stated three main goals for the Bears - - end the decade of dominance by the Green Bay Packers over the Bears, capture the NFC North Division and win the Super Bowl. After a rough start in 2004, Smith made improvements for the 2005 season and was named by the Associated Press as NFL Coach of the Year. In 2005, Smith led the Bears to a 27-24 victory in the Divisional Playoffs against the Seattle Seahawks. Advancing to the NFC Championship, "da Bears" defeated the New Orleans Saints 39-14. He led Chicago to division titles in 2005 and 2006, becoming one of only two coaches in team history to lead the Bears to consecutive division titles. He reached a career high of 13 wins in 2006, winning the first seven games of the season. In 2006 Smith became the first African American coach to lead a team to the Super Bowl - - doing so with close friend Tony Dungy, who was head coach for the Indianapolis Colts. Smith now has over 27 years of coaching experience at the collegiate and professional levels and continues to lead the Chicago Bears. He is a member of the TSHOF Class of 2011.