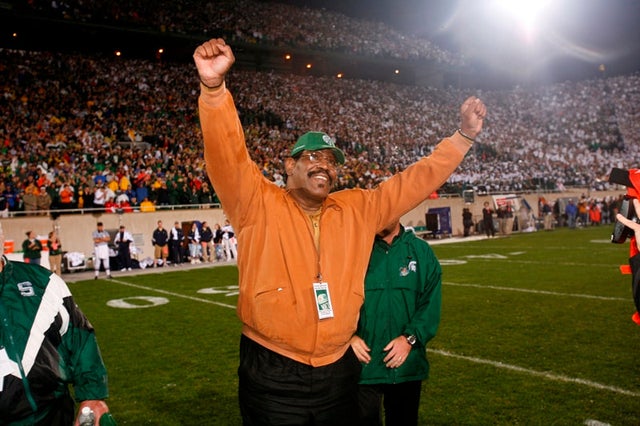 At 6'7 Charles Aaron "Bubba" Smith was a big man who made a big impact on the football field and later turned to the "big screen" as a second career. Growing up near Beaumont, Smith played football for his father, Willie Ray Smith, Sr., at Charlton-Pollard High School. Smith, Sr. was a head football coach at three Beaumont area high schools. He totaled 235 career victories and coached both of his sons during their high school days. Smith was hoping to play for the University of Texas, but it was before integration. He signed to play at Michigan State University and became a popular athlete, with fans creating the chant �"Kill, Bubba, kill." Smith played defensive end for the Spartans from 1963-66 and participated in the 10-10 tie with Notre Dame, noted at that time, as "The Game of the Century." Earning All-American honors twice during his time at Michigan State, Smith is one of only three Spartan football players to have his jersey number retired. Smith's final game of his college career took place November 19, 1966 against Notre Dame. Both the Spartans and Fighting Irish were undefeated, untied and ranked No. 1 and No. 2 in the nation. Notre Dame known for their great offense and Michigan State for their great defense, this match up had everything except a winner. Michigan State led in the beginning 10-0, and Notre Dame fought back to tie it 10-10. Notre Dame's Head Coach Ara Parseghian knew running down the clock would keep the Fighting Irish in the running for a national title, so he ran it out with only 1:10 left at Notre Dame 30-yard line. Much controversy took place after the notorious game, and criticism of Coach Parseghian�s decision lingered for years. As stated on ESPN Classic, "When Michigan State and Notre Dame are mentioned in the same breath, everyone thinks of the 1966 game." The Fighting Irish were later noted national champions. Turning professional in 1967, Smith was selected by the Baltimore Colts as the first overall selection in the NFL Draft. Smith was the Colts' starting left defensive end for five seasons and played in two Super Bowls, winning Super Bowl V in 1970. He had excellent speed, was impressively quick for his size, and usually caught a double team from two blockers. Selected as First Team All-Pro in 1971, Smith was traded from the Colts in 1972 He spent two seasons with the Oakland Raiders and two more with the Houston Oilers before a knee injury ended his career in 1976. Smith was inducted into the College Football Hall of Fame in 1988. After his football, Smith was recruited to appear in commercials for Miller Lite beer. He and NFL Hall of Fame star Dick Butkus were cast as inept golfers and polo players in the famous TV spots. He later stopped doing the ads because he didn't like the effect drinking had on people and didn't want to be perceived as contributing to it. Smith transitioned to acting in movies and on television, mostly in comedy roles. Smith is best remembered for playing Moses Hightower in six "Police Academy" movies. He also made appearances in several TV series. Smith passed away August 3, 2011 at the age of 66. He is a member of the TSHOF Class of 2011.