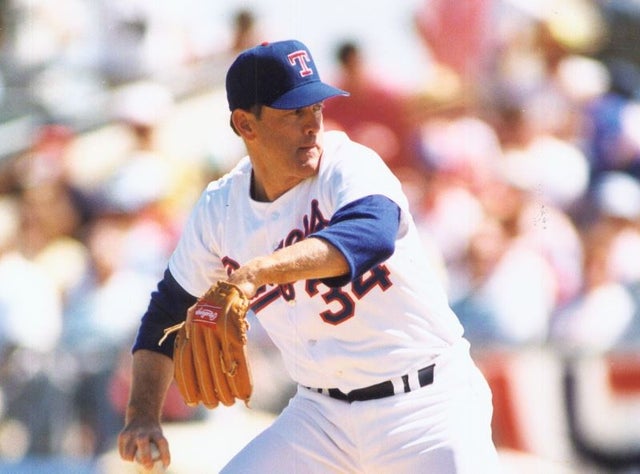 ﻿The Alvin, Texas, native Nolan Ryan was one of the greatest pitchers in baseball history. Ryan pitched a record 27 seasons with the New York Mets (1966, 1968-1971) California Angels (1972-1979) Houston Astros (1980-1988) and Texas Rangers (1989-1993). He holds the major league record for career strikeouts (5,714), the only player ever to eclipse the 5,000-strikeout mark; career no-hitters (seven); single-season strikeouts (383); and career walks (2,795). The 6-foot, 2-inch, 195-pound right-hander had a career record of 324 wins and 292 losses. Known as "The Ryan Express,: Ryan's fastball was regularly clocked at speeds of 100 miles per hour. Along with Jackie Robinson, the eight-time All-Star Ryan is the only other major league player to have his jersey retired by at least three teams (Angels, Astros, Rangers). Ryan, who is also tied for first in MLB history with 12 one-hitters, was inducted into the National Baseball Hall of Fame in 1999 and the Texas Sports Hall of Fame in 1985. Following his playing career, Ryan took up ownership in two Texas-based minor league teams, the Corpus Christi Hooks and the Round Rock Express, before being hired as the president of the Texas Rangers in 2008. Ryan later partnered with Chuck Greenberg to purchase the Rangers from owner Tom Hicks in August 2010. After Greenberg sold his stake in the Rangers in 2011, Ryan became the team's principal owner.