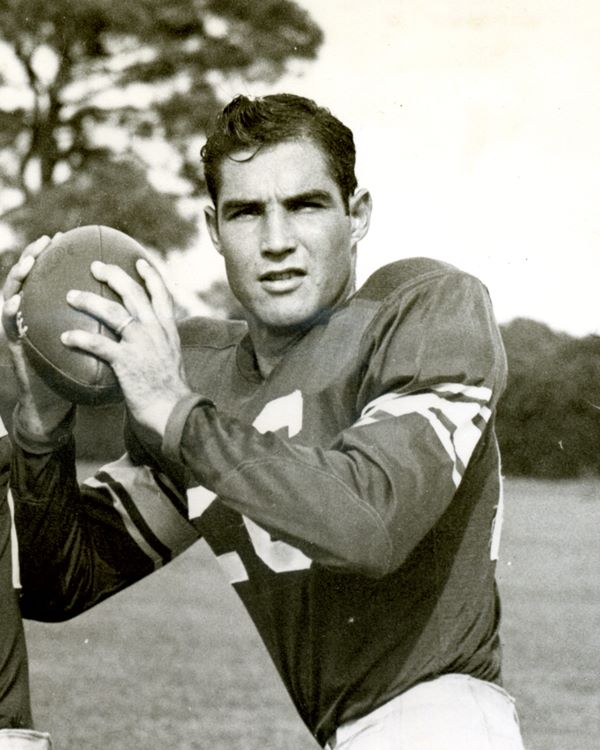 San Antonio native Tobin Cornelius Rote played college and professional football from 1946-1964. Beginning his collegiate career at Rice University, he played quarterback for the Owls from 1946-49 and led the team to a 10-1 record his final year. Three times he led the Owls to the Southwest Conference Champions. Turning pro in 1950, he was selected by the Green Bay Packers in the second round of the NFL draft. He became the starting quarterback his first year and spent six of his seven seasons as the leading passer for the Packers. He was also an outstanding runner and led the Packers in rushing three of his seven seasons. According to analysts, Rote was one of the most under-rated quarterbacks in the NFL. He ranked third in the NFL in passing touchdowns, first in rushing yards by a quarterback and second in touchdowns during his time with Green Bay. The 1956 season was a year to remember Rote's impact in the NFL. Although the Packers were an unimpressive 4-8, he led the entire NFL in passing yards and passing touchdowns and ranked second in rushing touchdowns. He scored a total of 29 touchdowns, the highest single-season total to date. The Packers' offense, other than Rote, scored an underwhelming 5 out of 29 touchdowns the same season. He also led the league in pass completions, pass attempts, rushing attempts and rushing touchdowns. To this day Rote's 1956 achievements rank among the greatest in history of NFL. Rote was traded from the Packers 1957 and divided his remaining years among several teams: the Detroit Lions, San Diego Chargers, Denver Broncos and Toronto Argonauts. While playing for Detroit, Rote split time with Bobby Layne. He actually ended up with more passing touchdowns, fewer interceptions, more wins and fewer losses during his time with the team. When Layne broke his leg that season, Rote was left to lead the team - - all the way to an NFL title. Noted as one of the greatest playoff performances in history, the Lions defeated the Cleveland Browns 59-14, with Rote completing 12 of 19 passes for 280 yards and four touchdowns. After a losing season in 1959, with an aging and untalented Lions team, Rote decided to head to Canada to play for the Toronto Argonauts. In his first season he became the Canadian Football League's second quarterback to surpass 4,000 yards and broke all passing records. After two years in Toronto the San Diego Chargers persuaded him to return to America. He spent two seasons in the American Football League, winning the Chargers a league title and being named and captured the Associated Press Player of the Year Award. He played with the Denver Broncos for three games in 1966 and then retired. During his 13 seasons and 149 games of professional football, Rote accumulated many impressive statistics. He passed for 18,850 yards, rushed for 3,128 yards and had a total of 149 touchdowns. He's the only quarterback to lead his team to both an NFL and AFL championship. At the time he retired, Rote had more rushing yards than any quarterback in NFL history. He now ranks 7th all-time. Rote was inducted into the Green Bay Packers Hall of Fame in 1974. He passed away on June 27, 2000. Rote is a member of the TSHOF Class of 2011.