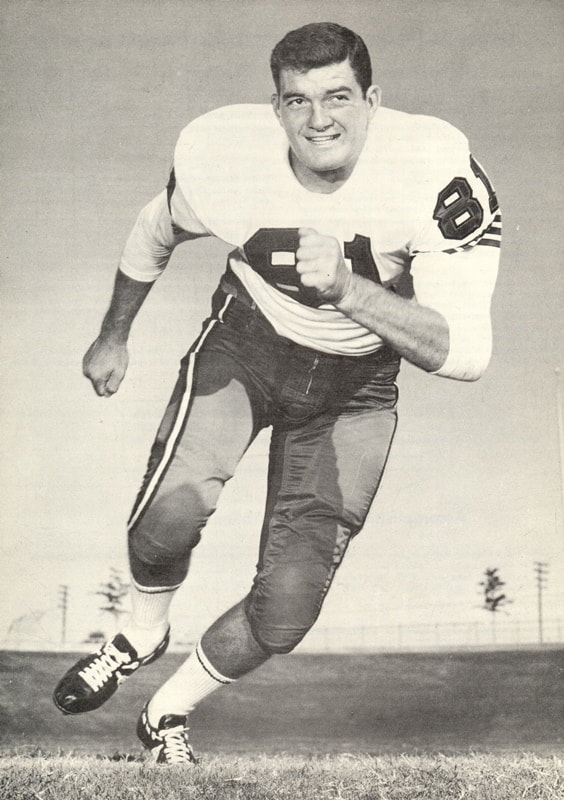 Former Texas Tech All-American Dave Parks joins the Class of 2011 as one of the greatest players in Texas football history. Parks was the first Red Raider to earn First Team All-American status and is the only former player from Texas Tech to be the No. 1 pick in the NFL draft. He was selected in 1964 by the San Francisco 49ers. Born in Muenster, Texas, and raised in Abilene, Parks became a star receiver at Tech. Blessed with "great hands" and the ability to make the big catch, he was consistent throughout his career. While at Tech, Parks established nearly every receiving record for the university. He held the career reception record at 80, most yards in a season at 499, had 32 single season receptions in both 1962 and 1963. Other record are single game receiving yards of 132 and the most career receiving yardage at 1,090. Parks was a multi-talented athlete, recognized for his ability to play both offense and defense. He had a remarkable 98-yard interception against Colorado in 1963, ensuring a 13-12 win for the Red Raiders. It's a record that still stands today. Parks also punted and was honored as one of the nation's best blockers. Parks was selected as an All-Southwest Conference receiver his last two seasons. He made the Associated Press First Team All-American squad following his senior season in 1963. Parks was joined on that team by future NFL legends Roger Staubach, Dick Butkus and Gale Sayers. The honors continued to roll in. He was recognized with consensus honors as a split end by The Sporting News, Boston Recorder-American, Sports Extra, American Football Coaches, Time Magazine and Football Weekly. Parks was rewarded with invitations to the East-West Shrine Game, the Senior Bowl, the Coaches All-America Game, and was named to the Chicago Tribune's All-Stars. Playing for the West in the East-West Shrine Game, Parks blocked the game-winning extra point attempt by the East. In the Senior Bowl, he hauled in a George Mira touchdown pass to preserve the South's 20-12 victory. Parks spent 10 years playing in the NFL with San Francisco (1964-67), New Orleans (1968-72), and Houston (1973). He played in three consecutive Pro Bowls his first three years and was named to the All-Pro Rookie Team. Statistically, his best year in the pros was in '65 when he finished with 80 catches and over 1,300 yards and 12 touchdowns. For his career, Parks finished with 360 receptions for 5,619 yards and 44 TDs. He had a remarkable average of 15.6 yards per catch. Inducted into the National Football Foundation and College Hall of Fame, Moore continues to inspire Raider football fans today as a living legend. "Dave Parks is one of our greatest football players," said former Texas Tech Athletic Director Gerald Meyers. "He's been successful at all levels and we're proud of the things Dave accomplished." Parks has served as the associate director of the Texas Ranger Law Enforcement Association and on the executive board of Dallas' NFL Retired Players Association. He also invented the "Speedy Weedy" a lawn and garden tool that he manufactures and sells. Parks is a member of the TSHOF Class of 2011.