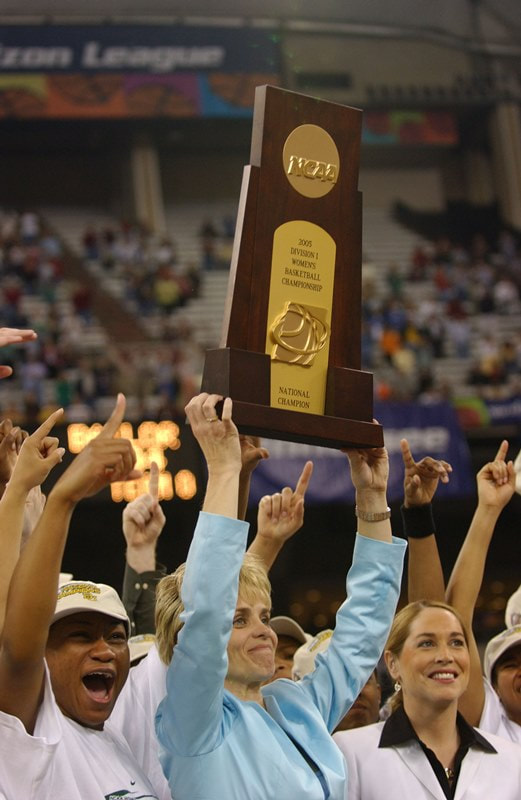 One of the most decorated individuals in women's basketball history, Kim Mulkey has turned the Baylor Lady Bears into a national power, winning three national championships (2005, 2012 & 2019), including leading the first NCAA team in history-men or women-to a 40-0 record in a single season in 2012. In 19 seasons at Baylor (2000-01 to present), Mulkey has posted a 576-99 (.853) record. Mulkey has 19 straight 20-win seasons, 18 NCAA tournament appearances, 16 trips to the Sweet Sixteen, 9 trips to the Elite Eight and four trips to the Final Four. In 2003, the only season the Lady Bears didn't make the NCAA tourney field, they advanced to the WNIT final game. In 2005 the Lady Bears, led by Big 12 Player of the Year Sophia Young, swept the Big 12 regular season and tournament titles. In the NCAA tournament they knocked off LSU and Michigan State in the Final Four to win the program's and the Big 12's first women's NCAA basketball National Championship. Her Lady Bears have won 10 Big 12 regular seasons championships including nine in a row from 2010-11 to present. Mulkey then made history by becoming the first person, man or woman, to win an NCAA title as a player, assistant coach and head coach. As a player, Mulkey led the Lady Techsters to a 130-6 record, two national titles and four Final Fours from 1980-84. During that time the 5 foot, 4 inch playmaker, known for her spectacular passes and French braids, also led Louisiana Tech to its first two national championships (1981 and 1982) and was a part of the USA's Gold medal-winning team at both the 1984 Olympics and the 1983 Pan American Games. In 2000, she was inducted into the Women's Basketball Hall of Fame. Mulkey, a graduate of Hammond (La.) High School, is a member of the TSHOF Class of 2009.