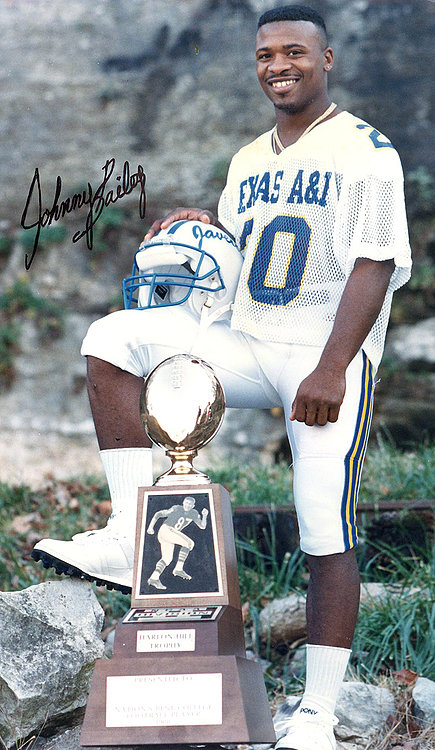 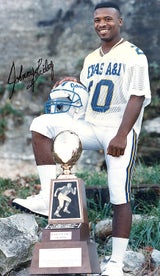 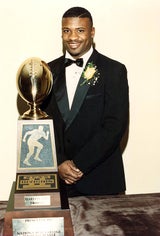 Johnny Bailey proved himself to be one of the most dynamic running backs on the field by breaking impressive records as a Division II and NFL football star. Bailey, a Houston native, stood out when he led Yates High School to the 1985 5A State Championship title.

After graduating high school in 1986, he began playing for Texas A&M A&I, now Texas A&M-Kingsville. As a freshman, Bailey finished his first season with an astonishing 2,011 rushing yards, and was runner up for the DII player of the year award, the Harlon Hill Trophy. His next three collegiate seasons he led DII in rushing yards and successfully won the Harlon Hill each year. Bailey broke another record when he rushed 6,000 yards, a feat at the time that had only been accomplished at the college level by Tony Dorsett. By the end of his time in school, Bailey had an impressive count of 7,803 rushing yards, a NCAA career record and was the No. 3 all-time leading intercollegiate scorers with 428 points once he graduated.

Bailey’s impressive skills continued to earn him titles and records in his professional career. He was drafted to the Chicago Bears in 1990 and played for the franchise for two seasons. As a rookie, he set the record for longest punt return at 95 yards. He played two seasons with the Arizona Cardinals and two more with the St. Louis Rams. Bailey led the NFL in punt returns and was invited to the Pro Bowl in 1992 as a return specialist. He was inducted into the College Football Hall of Fame in 2002.

Tragically, Johnny Bailey passed away on August 20, 2010 after battling pancreatic cancer in his hometown of Houston at the age of 43. He was inducted into the Texas Sports Hall of Fame in 2018.