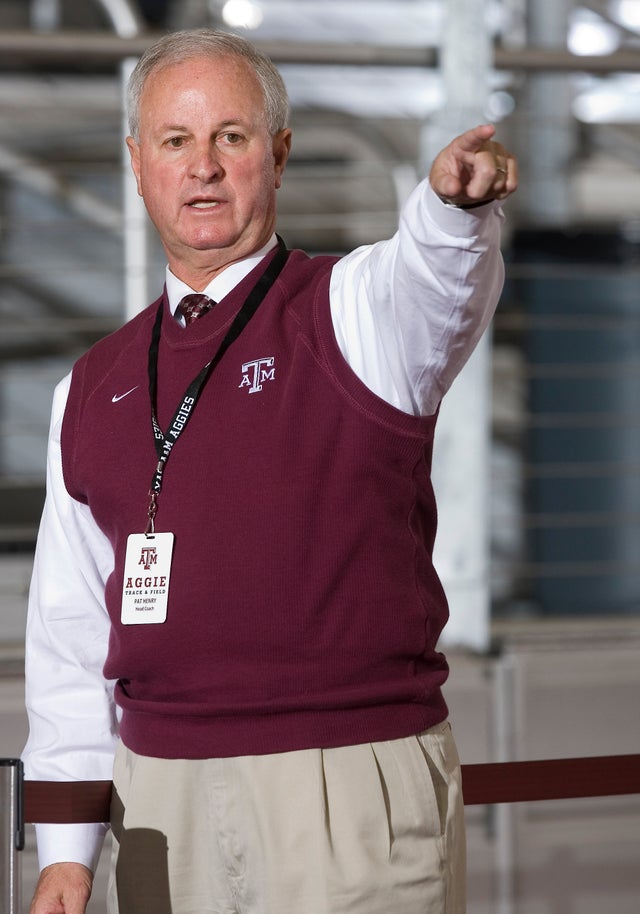 Pat Henry - An Albuquerque, NM native, Henry first made a mark in Texas when he started his collegiate coaching career at Blinn College in Brenham where he would win two NJCAA titles, leading to a career at LSU from 1988-2004. Henry moved to Texas A&M in 2005 where he led the Aggies to dominate the Big 12 winning 14 total conference titles. Since moving to the SEC, Henry has helped the men win one outdoor track title (2013) and one indoor title (2017), and one women’s outdoor title (2014). His biggest mark came as the first coach to lead a school to three consecutive NCAA men's and women's track & field titles, which he did with Texas A&M from 2009-2011. He currently has 36 national team titles on the NCAA Division I level. In addition, Henry also has a pair of national titles on the NJCAA level while coaching at Blinn College in Brenham. In achieving the most NCAA championships in history by a head coach for indoor and outdoor track and field, Henry is currently the active leader and third among coaches all-time in any sport for national team titles. In 1989, Henry became the first coach in NCAA history to win both men's and women's track and field national championships at the NCAA Outdoor Championships. In 1990 his LSU squad repeated the feat and Henry was the only coach to claim consecutive double NCAA titles until he achieved the accomplishment again at Texas A&M in 2009 and 2010. During international duty, Henry served as head coach of the U.S. men's national team during the 2007 World Championships in Osaka, Japan. He led the U.S. men's team to a record 10 gold medals, bettering the previous best-of-nine set during World Championships in 1991 and 2005. In addition, the U.S. men's team totaled 19 medals, the best tally by the United States since the 1991 World Championships.

Tom Kite Jr. - Winning the 1992 U.S. Open Championship on the demanding Pebble Beach course put an exclamation point on the brilliantly consistent career of Thomas O. Kite, Jr. Kite won 19 PGA Tour events and was the first player in tour history to reach the 9 million dollar mark in career earnings. The dollar signs don't say it all about the former University of Texas golfer who, with Ben Crenshaw, led the Longhorns to a pair of NCAA titles in 1971 & 1972. Kite played on 19 National Teams including eight Ryder Cup appearances. He also captained the U.S. Ryder Cup team in 1997 at Valderrama, Spain. Kite won the Vardon Trophy for lowest per round scoring average in 1981 and '82 and was the PGA Player of the Year in 1989. He is currently playing on the Champions Tour where he has finished first ten times since 1999.