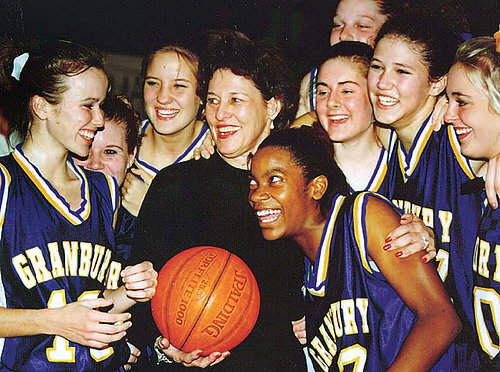 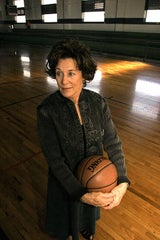 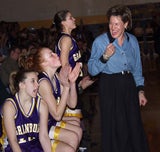 Leta Andrews began her illustrious career as a player at Granbury High School when she and her sister, Shirley, led the Lady Pirates to the state tournament in 1954 and 1955. Her coaching career began in 1962 at Tolar High School and included stops at Gustine, Comanche (1965-1976) and Corpus Christi Calallen (1980-1992), where she won a Class 4A state title in 1990. Andrews is currently the coach of her alma mater Granbury (1976-1980, 1992-present). On Dec. 9, 2005, Andrews won her 1,218th game to break Charleston, Tenn., coach Jim Smiddy's record as the winningest girls high school coach in the nation. Five years later, when Granbury defeated Midlothian, 62-43, on Dec. 7, 2010, Andrews became the nation's winningest coach for girls or boys, surpassing longtime Fort Worth Dunbar boys coach Robert Hughes with her 1,334th career win. Andrews ended the 2011-12 season with an overall career mark of 1,375-311 in 50 seasons. Her teams have been to 16 state Final Fours and have averaged 28 wins per season. Some of Andrews' honors include selection into the Texas High School Basketball Hall of Fame and being selected to coach the 2004 McDonald's High School All-America Game. She also was selected as the Walt Disney National Teacher of the Year in 1993. Andrews was inducted into the Texas Sports Hall of Fame as part of the class of 2007, the same year she earned the NHSCA's National Coach of the Year award. Andrews was a 2010 inductee into the Women's Basketball HOF, located in Knoxville, Tenn. She has been featured on CBS Evening News and written about in The New York Times, and was honored by the Texas Legislature on March 2, 2011. She told the Dallas Morning News in 2010 that along with winning the state tile, one of her greatest career highlights was getting to coach her three daughters - Lindy, Sissy and Lisa - who all were all-state players in high school and played at the University of Texas.