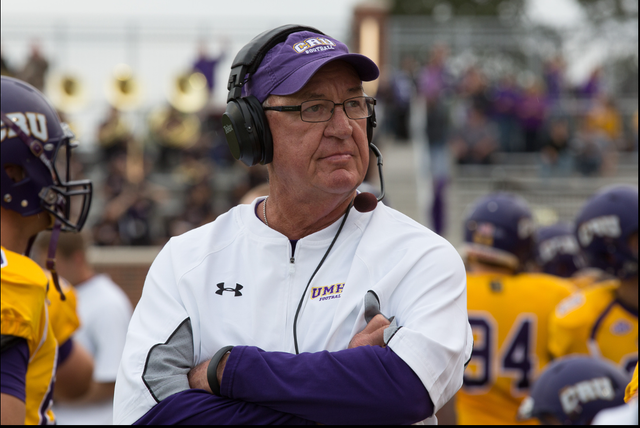 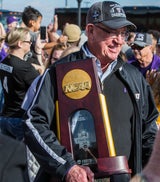 Pete Fredenburg - Pete Fredenburg is known as the man who brought the University of Mary Hardin-Baylor to the college football world. After graduating from Southwest Texas State University (now Texas State University) he began his coaching career as a high school coach for Canyon High School, New Braunfels High School, and Giddings High School. Fredenburg started his college coaching career with a 13-year tenure at Baylor University as defensive coordinator and assistant head coach. While at Baylor, he won the Southwest Conference Defensive Coach of the Year. He moved on to Louisiana State University and then Louisiana Tech University where he was defensive coordinator. In 1998, the University of Mary-Hardin Baylor Cru hired him as head coach for the program’s inaugural season. Fredenburg has held this position for 22 years and seen the team through some amazing accomplishments. In just the fourth season of the program’s existence, the Cru went to the NCAA DIII playoffs and after just five years of his leadership, the Cru won its first American Southwest Conference Championship. The team finished second in the nation in NCAA DIII schools in 2004 and conquered consecutive conference championships from 2005-2017. UMHB won the NCAA Division III National Championship in 2018 and set an ASC record for wins in a season after finishing 15-0. Fredenburg has compiled an impressive 211-39 record in 22 seasons as the only head coach in the history of the UMHB football program and he currently ranks among the top five active Division III head coaches in career victories. The Cru were ASC Champions in 2019, 2018, 2014, 2013, 2012, 2011, 2010, 2009, 2008, 2007, 2006, 2005, and ASC Tri-Champions in 2015 and 2003 after winning their first ASC Championship in 2002. Coach Fredenburg has coached 24 AFCA All-Americans, seven Academic All-Americans, 139 All-Region selections, 407 All-Conference players, 18 Academic All-District VI players, and 231 Academic All-Conference selections during his tenure at UMHB. The Cru has also earned 16 trips to the NCAA Division III Football Championships under Coach Fredenburg, claiming berths in 2001, 2002, 2004, 2005, 2006, 2007, 2008, 2009, 2010, 2011, 2012, 2013, 2014, 2015, 2018 and 2019. Fredenburg is an 11-time ASC Coach of the Year and has also earned AFCA Regional Coach of the Year honors ten times in his career. He was named Liberty Mutual Division III Coach of the Year and also claimed American Football Monthly Division III Coach of the Year honors (2013) and AFCA Division III National Coach of the Year honors (2016). He was inducted into the Texas Sports Hall of Fame in 2018.