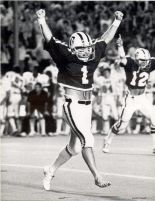 Tony Franklin, was the first barefoot kicker in the NFL. The Big Spring, Texas native, was the first Texas A&M University kicker to receive a full ride scholarship. As an Aggie, he set the NCAA record for a 65 yard field goal on October 16, 1976. Franklin still is tied for 5th for this record but he is the only kicker to make two field goals of sixty yards or more in the same game. During his collegiate career, Franklin broke 18 NCAA records, including most field goals of 50 yards or longer in a career (16), longest average for field goals made in a career (39.5 yards), most field goals made in a three-year career (45), most career field goals (56), and career kick scoring (291 points). He earned All-American honors in 1976 and 1978 and Second-team All-America in 1977. Listed as a "Legend of the Sun Bowl" for his 63 yard field goal in the 1977 bowl game against Florida, Franklin is also a member of the Sun Bowl's 75th Anniversary All-Sun Bowl Team. Another honors include Playboy Pre-Season All-American (1977 and 1978), twice named All-Southwest Conference First Team, twice named All-SWC Second Team, All-Time All-SWC First Team, 1970s All-Decade Team, Best of the Last 25 years All-American Teams (1969-1993), Top 75 College Football Players of All-Time, and All-America selection by the Football Writers Association of America.

Franklin was drafted in the third round of the 1979 NFL Draft by the Philadelphia Eagles. His first pro game on September 2, 1979, Franklin kicked the first barefoot field goal in the history of the NFL. This started the barefoot kickers era of the 1980s and Franklin’s foot became a celebrity of sorts. At the time, Franklin had the fourth longest field goal in NFL history by a rookie with a 59-yarder and was named All-Rookie. He played for the Eagles from 1979 to 1983 before being traded to the New England Patriots. In 1986, he led the NFL in field goals made (32) and scoring (140 points). The same year Franklin was selected to represent the AFC in the Pro Bowl. He played in Super Bowls XV (1981) and XX (1986). Franklin finished his 10 year NFL career with the Miami Dolphins and remains the NFL’s all-time barefoot scoring leader with 872 points. He was inducted into the Texas Sports Hall of Fame in 2015.