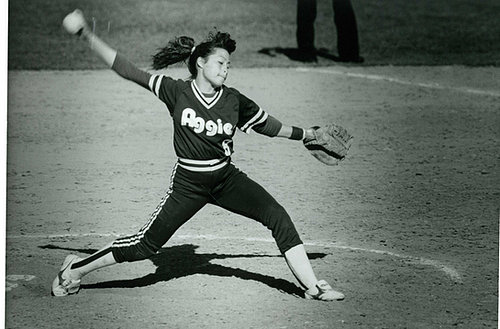 Shawn Andaya is a college softball legend. In her four years at Texas A&M, she was a three-time All-American and the winning pitcher for the Aggies in the 1987 national championship game.

Born and raised in Lodi, California, Andaya made her mark at Lodi High School, receiving the school’s outstanding athlete award for the 1982-83 school year. She was also honored as Lodi’s 1983 female athlete of the year.

Andaya’s experience on and off the softball field at Texas A&M are cherished memories. The pitcher posted a 114-28 record with 10 saves in her four years, setting an NCAA career record with 1,234 strikes.

During her career she led the Aggies to World Series appearances and broke the record for most innings pitched in a single Women’s College World Series (WCWS) game with 25. The record is still held by Andaya today. As a freshman, Andaya won her first World Series game with an RBI in the 25th inning.

One of her career highlight was throwing a perfect game against UCLA in a WCWS elimination game in ’87. The Aggies defeated UCLA twice that year to earn the NCAA title.

Not many people can say that they finished their sport on top, achieving the highest pinnacle their sport has to offer.”

In 2006, the Aggie All-American was selected to be part of the NCAA’s 25th Anniversary Women’s College World Series team.

In 1992, she became a member of the Texas A&M Athletic Hall of Fame, and this year she will become the first softball player inducted into Texas Sports Hall of Fame and the 25th member associated with Texas A&M. She joins the ranks of Aggie inductees such as John David Crow, Gene Stallings and Class of 2011 member Gary Blair.

Andaya left Texas after graduating from A&M, but returned to Bryan-College Station in 1992 to serve as Assistant Coach for the Aggies. She left coaching in 1996 and now works for non-profit organizations.

Andaya and her husband Al Pulliam, have two boys, A.J. and Trey, who both enjoy playing sports.

Twenty seven years after the Aggies championship victory, Andaya doesn’t boast about her collegiate success, but remembers how much it has shaped her life.

“When you accomplish something like that, you feel like you can do just about anything,” she said. “Everything I have learned from sports I have mimicked in real life – trying to be a leader, the importance of dedication. Through sports, it was evident that hard work pays off and you can accomplish your goal.” She was inducted into the Texas Sports Hall of Fame in 2011.